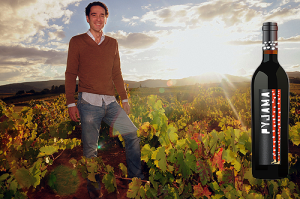 Nacho León is a visionary. His Demencia de Autor wine is fast gaining devotees around the world, yet the guy works out of a rented warehouse near Villafranca del Bierzo. People have been making wine here in El Bierzo since Roman times and more or less continually since the 9th century. It’s the last stop before the Camino de Santiago climbs tortuously into the Galician mountains. Ailing, weather beaten, God-fearing pilgrims passed through the 12th century ‘Pardoning Gate’ here in order to receive absolution from the local priest before continuing on the most arduous stage of the journey, conscious of the fact that between Villafranca and Compostela, death, either from exposure to the elements, wolves or brigands, could come tracking them down at any moment.  I’m convinced the telluric energy and power of the land, coupled with its ancient traditions, are transmitted through the earth and into the vines here. I’m digressing. A visit to Demencia de Autor a couple of weeks back fulfilled a dream and this man is a dream seller, a wine whisperer even, according to my friend Shannon. Pyjama, he told me, was the stuff of dreams… the way we walk around the house in our pyjamas and dressing gowns, those intimate family moments, not a care in the world, very typical of the people round here, El Bierzo. An intimate wine you’d love to share with the family, that’s the concept behind it, he mused. Who could possibly disagree? Alzeimer, a solidarity wine launched a month or so ago, is a fabulous gesture. At 20.00EUR a bottle, the proceeds go to the Asociación de Familiares de Alzeimer, a Spanish charity set up to help families cope with this devastating condition. And finally, Demencia de Autor. Why the name? Nacho believes the word Demencia is associated with the improbable, a slight mental disorder, but full of ingenuity and brilliance. That’s what our wine is about, he enthuses.  It’s a young project, created and developed by young people who have one thing in common, they all love wine madly. We’re all demented then. I’ll be going back to El Bierzo in July, with or without my pyjamas and dressing gown.